I never thought I’d be directly affected by meth. I don’t know anyone immediately who does it (to my knowledge that is), but there I was on a Sunday night on an airplane with the stark reality that meth had become like  a stick caught in the bicycle spokes that is my life (I have a flair for the dramatic). I’ve flown many times. I’ve never been scared to fly nor have I had any weird/scary situations arise during flights.

After having a great birthday weekend visiting my parents in Monterey, I was at the airport waiting for my flight. They were about an hour late boarding but I wasn’t going to sweat the small stuff, so I just went with it. Finally once we boarded, it literally took them a half hour to start the taking off process. In the aisle across from me, there was a weird oily dude sitting with an oddly shaped green duffle bag. I didn’t really think too much of him initially, now I’ll never forget him.

So this guy leaves for the bathroom and leaves his bag just sitting on the floor. He’d been in the bathroom for over 20 minutes, and I could tell the flight attendants were getting concerned. My initial thought was that there was something sketchy (a bomb perhaps) in his bag which was why he had left it so conspicuously out in the open. Well, I suppose I should stop and explain how my crazy little brain works. I have very polarized ways of dealing with everything. It’s literally hot or cold, yes or no with me (I’m trying to change). There is no middle ground. I’m either thinking everything is super duper dandy and great, or the sky is falling and the world will soon end (I’m not bipolar, I swear). This case was no different. So I’m in my seat calm and silently sending a prayer to the Big Guy Upstairs to let me in, because my life as I knew it was practically over (I told you, I’m dramatic).

Finally after what seemed like an eternity, this dude comes back to his chair. This time he had like a black soot/ash on his cheeks. Now my experience with spotting drugs and people on them is severely limited, but I thought it was odd. About 10 minutes go by and then the police board the plane. A flight attendant goes behind the dude and signals him to the cops. Now, at this time he (drugged out idiot) is skittish as all get out. He’s fidgeting with a brush in his hair, looking around erratically, and just can’t sit still. Finally, I stop thinking about my impending afterlife and realize that this moron had been doing drugs in the bathroom. The cops ask him to get off the plane and come with them. To add insult to injury, this idiot had the gull to ask the officers if there was a problem (don’t do drugs kids).

The captain spoke over the intercom and said they were going to do a sweep in the bathroom to see if we’d still be able to go. We weren’t. The flight was cancelled and scheduled for the next evening. I felt bad because I had to call my parents to have them come pick me up again as I was stuck for another day. The plus side was that I got an extra relaxation day out of it; but the whole ordeal was incredibly inconvenient.

In my sick and cynical sense of humor, I teased some of the other passengers by saying, “If we had left on time maybe the junkie could’ve held on for the hour flight and done the drugs in Vegas, so thank you Allegiant Air!” (More on Allegiant Air in my next post). It got a few laughs, so I was satisfied. You’re probably wondering how in the hell does one get meth past those touchy little TSA people. Well, the Monterey airport is so small and antiquated that all they have is a metal detector. Bottom line, if you decide you want to reenact Breaking Bad, I’d advise you not to do it on an airplane, or at least not on a flight that I’m on. 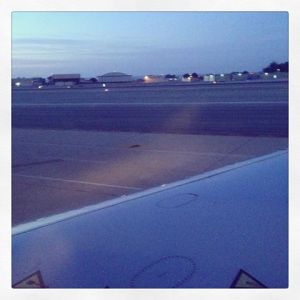 View from my window seat before we were deplaned