“Things happen for a reason”, is probably one of my biggest pet peeve quotes ever. I mean really? It offers no explanation or rationale to the situation at hand, merely suggesting that fate is like an indecisive teen at a Starbucks for the first time; it has no clue what it wants and you’re inconvenienced by the process. Well, as fate would have it, I ran into one of my neighbors and ended up having a very much needed talk.

I walk a few miles twice a day with the furchild, so I was out on my nighttime stroll and I decided to sit outside on the porch with Abbey to just enjoy the beautiful night’s sky. A few minutes into it, Abbey starts to whine as if she sees something, turns out, it was the dog from two doors down. He’s a friendly little dude so he came up to Abbey and they did the obligatory “sniff your butt” greeting. He was at my porch for a minute or so and out comes his owner, super apologetic. I didn’t mind as I was happy that Abbey is being more social with other dogs. Seeing as I’ve been working from home, I was in desperate need to talk to a human being as I’m sure my dog is getting tired of me talking to her.

So we ended up chatting and we got on the subject of work and I explained my departure from corporate slavery into freelance writing. I admitted that I was having trouble getting my footing and felt lost more than half the time. For someone with so many options, I still felt option-less. I also mentioned that I wasn’t sure I was up to the task and maybe I needed to return to the “real world” Jamie (her name I later found out) was incredibly understanding of my situation and listed a number of books to read and a site about creating a manifest journal to help streamline my goals and make them a reality. It’s about putting what you want out into the universe and making it happen. I’ve just started mine and I really dig the format.

We ended up talking for a good hour or so. I must say it was such a liberating and very much needed talk. I tend to be in my head so much that most of what I want to accomplish gets vetoed in 16 different ways mentally and I don’t even bother. It was also nice to meet someone with similar ideals and situations. Interestingly enough, I’ve actually finished 4/5 articles already and it’s not even 8 am.  I kind of liking this whole “interacting with people” thing. I might have to try it more often. I left that conversation with newfound encouragement and a new friend. 🙂 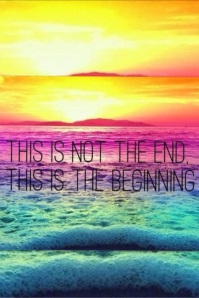 6 thoughts on “Sometimes Things Really Do Happen For a Reason”