There are many philosophies on how to house your dog whilst you are away. I suppose it’s like those moms who believe their way of parenting is the best way to parent.

“To crate or not to crate, that is the question.”

On topics such as those I often take a lackadaisical approach to “soap box” parents; dog parents too.

Abbey is an intelligent dog. Depending on what I’m wearing, she’ll act accordingly. If it’s athletic-wear, she’ll head for the door. Business-casual, she’ll go to her crate. Boy-shorts, it’s lounging time, in which she’ll lay on my feet dutifully taking her naps. While I think my fur-child is special, she is not without her faults.

After recently moving in with my roommate, her dog, Jeter ( a hot-tempered Chihuahua) has full house privileges, and aside from his temperament around  strangers, he’s a well enough” behaved dog. He and Abbey get along splendidly and often run to each other’s rooms, depending on which human gets up first.

I chose to crate Abbey as she likes to stick her nose where it does not belong. See, she has a penchant for human food and is quite skilled at getting it (much to my dismay). A few weeks ago, I decided to start leaving her crate open, in my room for her to roam around a bit. She did really well. Often times I’ll come home and she’ll be belly up, napping on my bed without a care in the world. Since she was behaving so marvelously, I decided to let her roam around the house with Jeter, hoping that his lack of food hunting would rub off on her. Sadly, I was wrong.

While I was away, I mistakenly left the pantry door open. I didn’t think anything of it as I do not usually put anything on the bottom in which Abbey can get into. I did not, however, take into account Carla’s food. So that Saturday, thinking that my “well-behaved” pup wasn’t causing trouble, I get a text from Carla that says,

“Your child got into the pantry and ate half a loaf of bread. She’s in your room in the corner looking remorseful and didn’t even ask for a treat when I took her out to pee”.

I wish I could say I was surprised by the behavior. Despite the fact that she eats regularly, that mangy dog will eat anything in her path. In fact, she has the nickname, “Poopers”, due to the aftermath of most of her human food eating encounters. While I will still continue to let her roam free in the house, I will take better care to not leave food in her sights as she cannot seem to help herself. After all, you love your child for who they are, and not who you want them to be. Even if that means you have to hide your food under lock and key. 😉 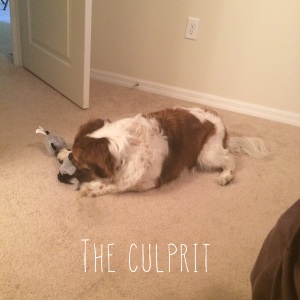 2 thoughts on “Abbey and the Loaf of Bread”