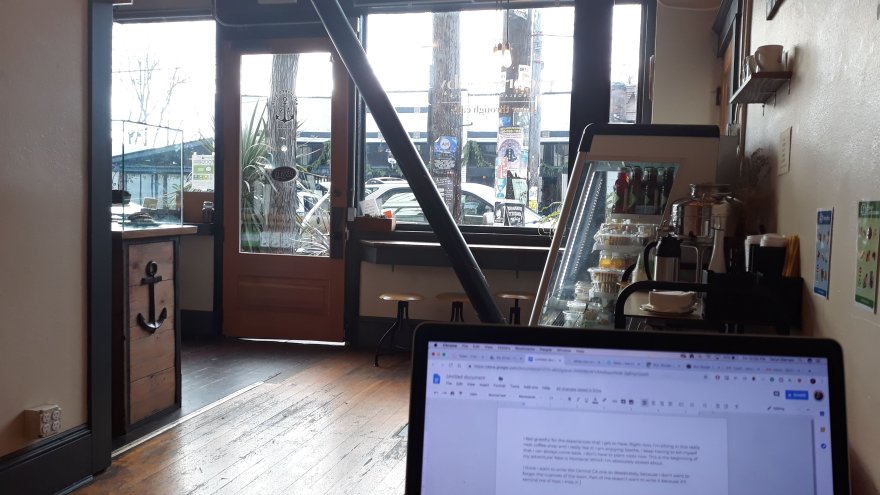 *Note from the writer:

Toward the end of 2018, after a much-needed nervous breakdown, I decided to embark on a nationwide trek across the country. This series will serve as a recollection of the shenanigans I experienced throughout my travels. These are my stories (dun dun *Law & Order chime)

Dreams of the cliche

I will fully admit that my urge to ‘see the world’ was conceived on a cliche desire to live life. I wanted to fully marinate in my ‘freelance life, nomad fever dream’ idealism come what may. In retrospect, it’s amazing what a shattered sense of self will trick your mind into believing. Also, social media and the perceived ideals of success (Instagram and Pinterest, anyone?) don’t help, but I fully own my hilarious misadventures.

A full three years later, I can say with love and humility, that I was dealing with a great sense of loss and ran away from life in search of something better. The most ironic part? I never found (what I publicly said I wasn’t) that something better. Years later, I found the truth, but I digress. You came here for my adventures in Seattle and I shall not further delay. Anyway, packing up Abbey and myself, we put Eugene, OR. in the rearview mirror and chartered toward Seattle. We made a fun pitstop in Portland, OR for lunch and a walk. There was this fun shop that had a patio for dogs. Abbey and I dined, fueled up, and carried on in our journey.

A month in the Emerald City

We arrived at the Airbnb in the evening. For this leg of the trip, I booked a month-long stay at a garden apartment. It was a really cool spot. The owners, a chill young couple with a sweet kiddo were from Maryland, and the space had some nice Maryland touches. I had arrived in mid-November and they graciously invited me to their Friendsgiving. Since I had no plans, I uncharacteristically accepted the invitation. It was a fun event, which was reinforced by the liquid courage I partook prior to joining the festivities. I don’t have photos of the event (or many meaningful photos of Seattle in general). This trip is definitely a coffee trip of sorts.

Aesthetic of the superficial kind

The place was situated between the Ballard and Fremont neighborhoods. This meant that there was a coffee shop (rather dozens) within a mile radius of any direction. I’m fairly certain that I tried all of them. I was hellbent on living the freelancer life, whatever that meant. To me at the time, it was brooding in coffee shops, carefully creating prose for my clients. I had some fat contracts at the time (hence spending a month in Seattle, it wasn’t cheap!), so your girl was balling. In hindsight, not financially smart, but hey, life was lived. As I write now, looking over the pictures I did take, they are so lame! I’m cringing about sharing these, but hey, I’m committed to being honest. I say that in the kindest regard. The pictures (shown below) chronicle a surface-level experience. However, I did have meaningful interactions a few weeks in.

After my first 2 weeks, I did end up investing more time in the community. I found a cool Seattle-based freelancer meetup. I met two ladies who I managed to dispense some solid business advice too. It also made me realize for maybe the first time that I actually knew what I was doing. When you’re working alone, it can be hard to gauge your own progress, so it was reassuring to find out that I was doing quite well! I had also met up with another lady who I had met at the Friendsgiving. We went out for Ethiopian food and exchanged pleasant a conversation. Nothing became of those interactions, but at the time, they were much-needed. I even ventured to a local yarn shop and purchased some skeins. Til this day I have not finished a project, but I’m working on that. On the nature front, Woodland Park was literally 1.5 miles away. Abbey and I made a daily habit of going. The first time I went, my first thought was ‘this would be good for hiding bodies’. So naturally, the writer in me decided to make a novel about this (it’s in the works, but boy did my travels help color the characters).

My time in Seattle was fun, reflective, and spontaneous of sorts. In fact, several people– including one ridiculously attractive barista– suggested that I head to Missoula MT next. To keep up with the randomness of my travels, I did just that! To wrap this up, as an older, self-professed wiser person, I can look back on my time in Seattle with a smile on my face. Life and travels will never go as planned, but there is beauty in the random adventure. It doesn’t look as folksy and hipster when you’re going through it, but the sands of time eventually dull the sharp corners, allowing you to enjoy the journey. Funnily enough at the time, I swore that I’d end up in Seattle (or Eugene for that matter) permanently. I’m happy to report that this doesn’t end up happening. For one, I desperately need the sun. Anyway, I hope you enjoyed my Seattle adventures. If it’s not evident yet, these travel adventures wind up being more about me than the cities/towns I visited. However, I promise, if you stick with me, I do end up having some interesting adventures that will surely make you chuckle. Next week, we’re in Missoula, until then, I hope you indulge in some shenanigans too!