A while back, I talked about writing letters to my best friend back home. As it stands, it’s still something I continue to this day. In fact, I’ve expanded my little operation to a few more friends in Cali and Hawaii. END_OF_DOCUMENT_TOKEN_TO_BE_REPLACED

It’s no secret that I love writing. There’s something about putting words on paper that is just the bee’s knees for me. While writing is a great love of mine, getting a handwritten letter in the mail is equally just as awesome. 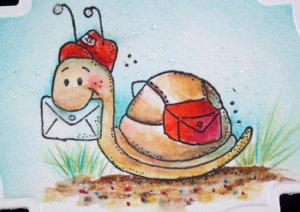 Melissa, best friend of 13 years (that long already?!) and I rarely ever talk to each other these days. She’s off in Santa Barbara playing housewife and mom while I’m in Vegas causing all kinds of shenanigans. One of the best things about our friendship is that though we don’t talk very often, we always pick up where we left off and it works. I suppose when you’ve known someone for more than half of your life, you understand each other incredibly well. Anywho, since we both are terrible at communicating on a regular basis, we decided to start sending snail mail.

Melissa and I many many moons (6 years) ago.

I LOVE getting letters in the mail. It’s right up there with birthday presents! Sadly in this day and age, getting snail mail that aren’t bills doesn’t happen enough in my opinion. I received my first letter from her yesterday and I was such a happy camper! Maybe it’s just me, but ready a tangible letter is much more inclusive and more awesome than in an electronic format.

Writing snail mail has so many intrinsic values to it. You can connect with someone who is far away from you. You have a reason to skip to the mailbox (I totally got caught by my neighbors but I didn’t care). Plus it takes away the static and distraction that electronics provides and allows you to communicate with your fellow people. Really, I could go on and on about why writing and receiving letters is the best thing, like ever.

So now that I’ve shared my love of getting mail, I’m off to write my letter and send one her way. Since I’m in the penpal spirit, I may look into sending letters to different countries! Does anyone else love snail mail as much as me? Let me know! Until then, happy Tuesday! 🙂

Today, I was going to write about my fondness for admiring older men (another story for another time), but I find myself baffled by the complexities of topics such as harassment and the like. I wasn’t going to talk about such subjects because as a woman, it appears that I may have differing opinions on the matter as opposed to the masses. However, after watching some troubling YouTube videos and reading about scary moments when a member of the opposite sex tried to strike up a conversation; I have become to believe one thing. Interpersonal communication is dying among Millennials.

What is Interpersonal Communication?

Interpersonal communication is the process by which people exchange information, feelings, and meaning through verbal and non-verbal messages: it is face-to-face communication.

Obviously I don’t mean that everyone under that category cannot speak to one another, but as we all become so engrossed with our precious technologies, we seem to have forgotten how to talk to our fellow man. When was the last time you talked to someone you didn’t know who was within 10 feet of you? Furthermore, if someone approached you offering casual conversation, would you accept and engage? I’m not talking about the cat calling weirdness that sometimes happens, but if a person poses a legitimate topic, would you write them off?

I ask this because all too often, I’m seeing/hearing people complain about harassment when the question was harmless. Since we seldom interact with each other in a spontaneous fashion, it seems as though our ability to do so has diminished severely. What I mean by this is that, communication/interaction is like a muscle, if you don’t exercise it from time to time, it will become underdeveloped and essentially useless. I grew up in a small  town in Southern California, where if you were in a long line, it would be completely normal to strike up a conversation with the person standing next to you. Nowadays doing that same action results in the recipient either thinking you’re weird or are trying to hit on them. Even more so, that one encounter becomes the cornerstone argument that harassment is a real and rampant thing that is oppressing the female gender. One Youtuber even went as far as saying that a woman’s #1 fear is rape. Uh, my biggest fear is snakes…so… yeah. I’m not saying harassment does not exist, it does. Has it happened to me? You bet. However, I do not live my life in fear because of a few instances. What’s even more frustrating is that hashtag movements have become a soap box for individuals to talk about the one time they got hit on at the bar by someone who was either incredibly nervous or could have been a jackass.

Let’s be honest, going up to a stranger and starting a conversation is hard, for everyone. It requires one to muster up the courage to speak with you in the first place, which seems like a miracle since we’re so distant from each other anyway. We’re already so closed off from the idea of talking to others without it coming from a cellphone, it’s not even funny. So my next question is, if talking to someone in a line, at a bookstore, or in a bar is so taboo or considered harassment, how are we supposed to connect with one another? Personally, even as an introvert, if anyone offers something interesting to say, I gladly welcome the interaction. Why? Because I appreciate the effort of a person wanting to interact and be human for a minute. What’s not human is being glued to a device as your only means of connecting with the outside world. Also, I find it entertaining as some of the very same people who are for this “movement” are the very same folks who complain about having trouble making friends or meeting potential partners. Well those types of interactions require you to speak to one another. It’s not rocket science.

To be clear, I am not downplaying anyone’s plights or dealings with harassment of any kind. I believe that everyone has the right to feel comfortable and safe. My problem is with the growing few who interpret a book recommendation as a scary experience thus deeming someone creepy. Guess what, not everyone is trying to sleep with you. Sometimes it’s nice to speak to someone new using your voice and not your thumbs. Let’s turn off our phones and get to know each other in the old fashioned way. So, with that being said, I’m off to go to a new coffee shop and speak to a stranger. I encourage you to do the same. 🙂

“What would you attempt to do if you knew you could not fail?

That quote is on a magnet that I put on my fridge about a year ago. When I bought it, my thought was I’d see it everyday when I pulled out my creamer for my coffee then magically become motivated to test my limits. The reality is, that most times I don’t even look at that magnet, nor do I venture out into unknown territory often. I ran into my neighbor again this morning as I was finishing my walk with Abbey. Honestly every time I see her I really do believe that sometimes things do happen for a reason. This morning was no different.

Last week, I had been struggling to progress with my freelance writing. I’ve been meaning to update my LinkedIn profile and put of samples of my work. The actual task of updating my profile is quite simple. You just have to update your career and upload some documents and Presto! You’re in business. If it’s so easy to do that, you’re probably wondering why on earth have I not done so? The simple answer is that, I’m scared to put my stuff out there. Once I hit that submit button, my hopes, fears, aspirations, are available to the world to do with whatever they choose. That type of vulnerability is terrifying to me. Granted, I realized that one of my key points in my post 2 weeks ago. I can’t very well encourage you all to be vulnerable if I’m not willing to do so myself, now can I?

Talking it out with my neighbor made me realize how much I hold myself back. My mind was working in “negative thought” overdrive. By holding onto negative thoughts and promoting self-doubt. I’ve talked myself out of doing simple tasks for fear of being judged. When I got home, I took a good look in the mirror and I’m resolving to make a change. I need to tear down the walls that I’ve built up and just get on with it. I am challenging myself to get out of my head and start living presently. And since it’s the beginning of the month, the timing couldn’t be better.

June is the month where I break out and really challenge myself both personally and professionally. I will update my LinkedIn profile and get over the fear of judgement. After all, in order to succeed, you have to start. In order to keep myself accountable, I’ll check in with my progress here and give an honest update with how it’s all going. My hope is that you’ll join me and stretch your minds to conquer whatever holds you back this month. Here’s to a growth-filled June. 🙂